Register for our live webinar on 7/7/22: Behind Every Bear Market Is an Opportunity

The stock market’s version of hockey’s hat trick is the double-digit performance of the S&P 500 over the past three years:

In the final quarter of 2021, stocks overcame numerous headwinds including a resurgence in COVID cases, a lack of additional stimulus from Washington, and the Federal Reserve moving aggressively to end the current Quantitative Easing (QE) bond buying program due to spiking inflation, to hit new all-time highs and produce the strong returns for all of 2021 that completed the “hat trick.”

In terms of the economy, The Conference Board estimates fourth quarter real GDP growth to be a robust 6.5%, and 5.6% for all of 2021. Additionally, the U.S. unemployment rate dropped steadily during the quarter and recent unemployment insurance claims hit their lowest levels since 1969. However, inflation became a much more critical concern in the fourth quarter as the Consumer Price Index reached a year-over-year gain of 6.8%, the highest in nearly 40 years. Despite the sharp increase, long-term interest rates did not reflect that concern as they were virtually unchanged for the quarter. Finally, corporate earnings estimates climbed sharply in the period as S&P 500 earnings estimates for the fourth quarter are forecast to grow by 19%, capping off a great comeback year for S&P 500 companies’ earnings (+45%).

The fourth quarter started with a continuation of the volatility that we saw at the end of the third quarter, as in early October there was still little progress in Washington on extending the debt ceiling, avoiding a government shutdown, or providing investors clarity on future tax changes contained in the Build Back Better bill. That political uncertainty combined with concerns over third-quarter corporate earnings results to send stocks lower to start the fourth quarter. But by the middle of October, Republicans and Democrats had extended the debt ceiling and avoided a government shutdown, while many of the tax increases proposed in the Build Back Better bill were removed from the bill, which eased investor anxiety about future tax increases. Additionally, the third-quarter earnings season proved to be better than feared as corporate America again proved resilient. Most companies posted better-than-expected results and 2022 S&P 500 earnings expectations rose yet again. Each of those positive developments helped send the S&P 500 sharply higher in October as the S&P 500 recouped all the September losses and hit a new all-time high late in the month.

The positive momentum continued in early November, as the S&P 500 drifted steadily higher given the tailwinds of 1) Clarity from Washington, 2) Strong earnings, and 3) Declining COVID cases. Additionally, while the Federal Reserve announced it would begin to reduce, or taper, its Quantitative Easing (QE) bond buying program starting in November, the pace of the reductions met investor expectations and markets continued to rally and hit new all-time highs in mid-November.
But on Thanksgiving Day, the World Health Organization declared the Omicron variant of COVID-19, which had just been discovered in South Africa, a “variant of concern” and that designation caused a sharp selloff in stocks, partially thanks to very low liquidity, as governments once again closed borders to international travel, and the world wearily braced for another increase in cases.
Additionally, at Congressional testimony in late November, Federal Reserve Chairman Jerome Powell surprised markets by stating that due to persistently high inflation, the Fed would likely need to accelerate the just-announced tapering of QE and endorsed doubling the pace of reduction. That acceleration came less than a month after the Fed’s initial tapering announcement, and it caused markets to price in sooner-than-expected interest rate hikes in 2022. Concerns about future Fed policy combined with Omicron uncertainty led to declines in stocks late in November and the S&P 500 finished the month with a small loss.

Markets rebounded in December thanks to less aggressive messaging on rate hikes from the Fed combined with governments not imposing economically crippling lockdowns in response to the surging Omicron outbreak. First, at its December meeting, the Fed announced it will accelerate the tapering of QE in 2022, and that QE would end in mid-March, about three months earlier than expected. The Fed also signaled it expected to raise interest rates three times in 2022 to combat rising inflation. But both of those announcements largely met the latest market expectations, and some reassuring commentary by Chair Powell that the Fed would remain supportive of the economy helped ease investors’ concerns that interest rates would rise too quickly in 2022.

Then, late in December, multiple studies implied that the Omicron variant, while more contagious than previous strains, resulted in substantially fewer severe COVID cases. So, while there would likely be new records in daily cases due to Omicron, the risk of hospitalizations and deaths remained low, and as such governments could avoid lockdowns such as those seen in March 2020. That news, along with the report of strong holiday retail sales (up 8.5% from 2020 and 10.7% from pre-pandemic 2019 levels) helped stocks extend the rally late in December, and the S&P 500 finished the month with a four percent gain.

What actions did we take in McKinley Carter portfolios in Q4?

In the ActiveTrack, Earnings Focus, and Hybrid programs, we reduced our exposure in the Vanguard International Growth Fund (VWILX) in order to move our overall international stock exposure (relative to total equity exposure) to 36% from 38%. This was done to reflect a more challenging economic environment for global supply chains and the resulting impact on a diverse group of international companies.

In the ActiveTrack program, the proceeds from the reduction in VWILX were added to our iShares Russell 1000 ETF (IWB) position.

In the Earnings Focus and Hybrid programs, we allocated the proceeds from the VWILX reduction to the iShares Core S&P Small-Cap ETF (IJR). We also eliminated our Activision (ATVI) position due to earnings uncertainty and ongoing litigation and added Linde (LIN - Linde is an industrial gas and engineering company). Linde was formerly known as Praxair Inc.

The S&P 500’s three-year average annual return of 26% naturally leads to the question of what’s next for the stock market. Are the outsized gains in this large cap stock index over the past three years an anomaly that needs to be unwound or are there reasons to believe that the fundamentals of the market can support further gains?
Historical data compiled by DataTrek Research shows the S&P 500’s performance in January following a strong year can be lackluster.

Since 1980, the S&P 500’s return in January is flat on average after returning more than 20% in the prior year, DataTrek found. The firm added that while the S&P 500 typically rises in the first five trading days of the new year — the tail-end of the “Santa Claus rally” period — that positive momentum fades through the end of January.

However, in those years, pullbacks tended to be excellent buying opportunities.

Our base case for markets

In our base case scenario, we foresee 2022 as another positive year for stocks, but caution investors that overall returns for stocks are likely to be lower than in the last 12 months, and volatility is likely to be higher coming off three consecutive years of above-average returns. We feel bond performance will be challenged again this year by a strong economy and a less accommodative Federal Reserve policy. We favor an underweight to bonds as any increase in interest rates will negatively impact bond prices.

We believe there are several key market drivers for 2022:

FIRST: While stocks are still expensive relative to their history, they are reasonably valued relative to low interest rate bonds.

Also, while the S&P 500 is expensive today, the high valuation is significantly influenced by the ten largest stocks. Excluding those, the rest of the index is not as richly priced. 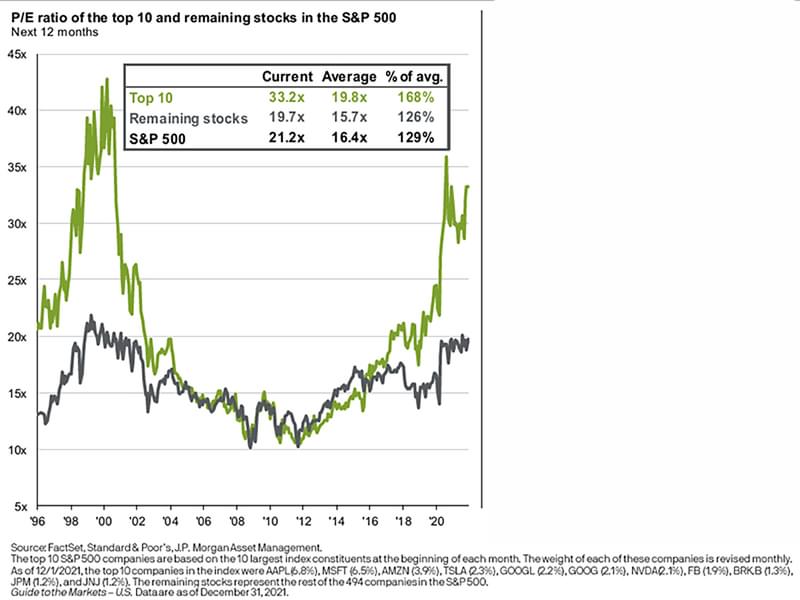 Within the stock market, we favor a combination of secular growth and economically sensitive U.S. value stocks along with an allocation to historically inexpensive international stocks. Higher valuation growth stocks, the big winners of the past few years, may underperform less expensive stocks as the Fed begins to lessen their bond buying program and moves to raise rates in 2022. 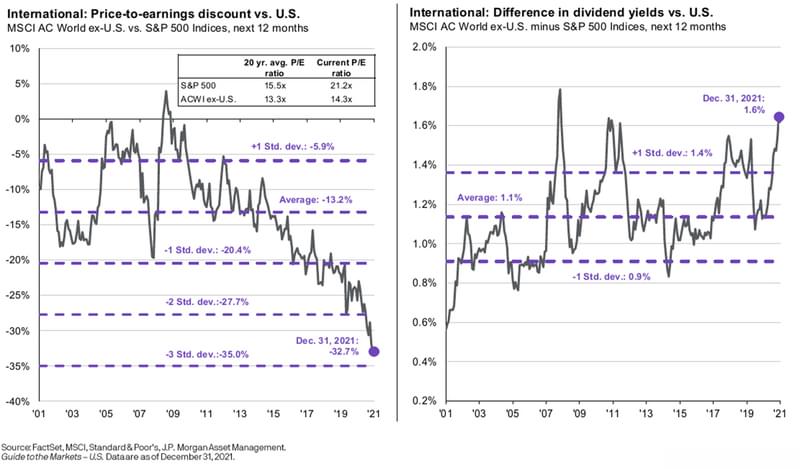 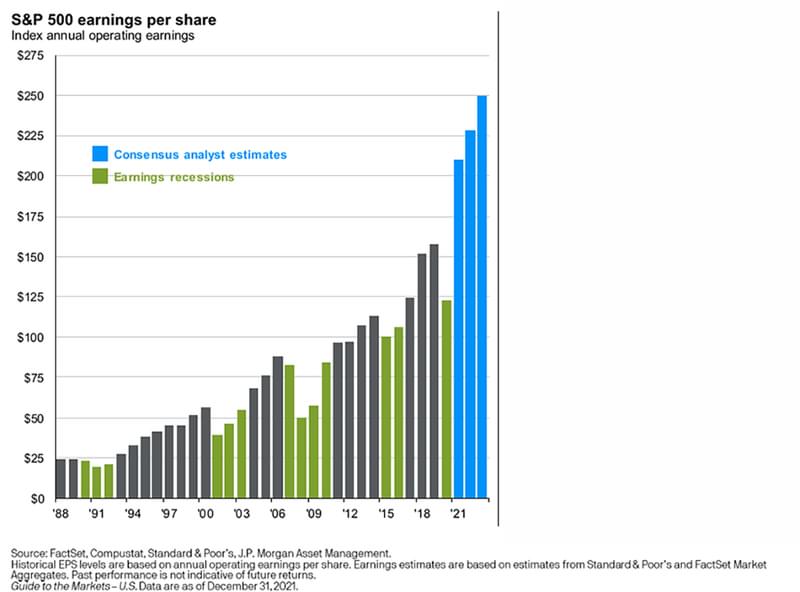 Companies have become more efficient during COVID and have, in general, been able to maintain their profit margins.

Also, consumer balance sheets are in much better shape than in the recent past as household debt service to disposable income ratios are low and consumer savings balances and net worth are still high as a result of the stimulus payments and rising stock market during the past two years.

AND LASTLY: Inflation is likely to peak in 2022 as supply chain shocks ease

We believe that much of the current inflation surge will prove temporary, including the energy and supply chain issues. While peaking inflation does not necessarily mean low inflation, any deceleration in the current uptrend will likely be welcomed by markets.

The three biggest risks to our forecasts are: 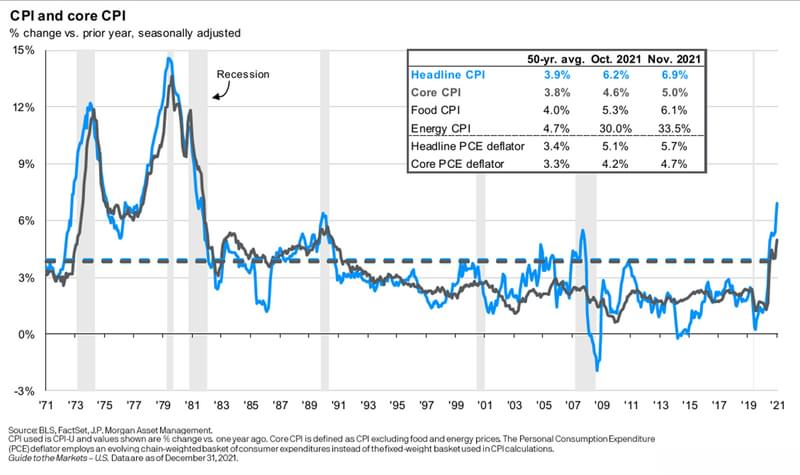 However, if inflationary pressures ease next year due to supply chain bottlenecks abating and the ongoing deflationary benefits of cost-saving technologies, long-term interest rates may remain range-bound, and the Fed may delay increases in short-term rates. These would be positive developments for the stock market.

Politics will also be a source of potential volatility in the first quarter of 2022 and beyond. Democrats failed to pass the Build Back Better social spending bill in 2021, but the process is not over, and none of us should be surprised if some version of that legislation passes in early 2022. From a market standpoint, investors will be most focused on any potential tax increases that might reduce corporate profits or consumer spending. Given the current version of the bill, market-negative tax increases look unlikely, but the legislative process is unpredictable, and we’ll continue to monitor the situation for any negative tax implications. Additionally, there will be midterm elections in November, and as is usually the case, we can expect the run-up towards the midterms to cause at least temporary market volatility.

Global tensions may also be a factor in 2022 as the Russian government builds a military presence on the border of Ukraine and the possibility exists that China takes more aggressive actions toward Taiwan.

Despite the economic and medical progress achieved in 2021, we remain vigilant towards risks to portfolios and the economy. While geopolitical and U.S. political uncertainty present a threat to markets, and risks of persistent inflation and a less friendly Federal Reserve exist, macroeconomic fundamentals (GDP growth, corporate earnings, still low interest rates) are still decidedly positive. It is important to remember that a well-executed and diversified, long-term financial plan can overcome bouts of even intense volatility (red dots in the chart below) such as we’ve seen in the past and will likely see again. 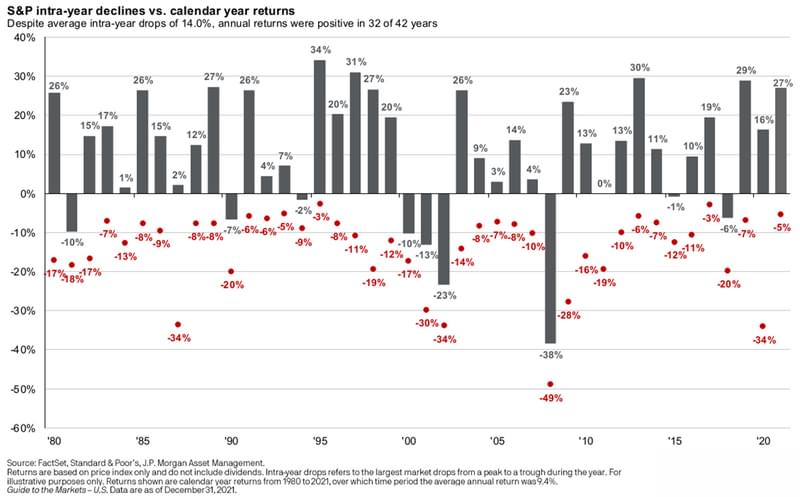 A Goldilocks Economy Sends Stocks to New Highs — Will the Bears Have the Last Laugh?

Looking back, the S&P 500 had a strong second quarter thanks to numerous positive developments that led to a “Goldilocks” economic environment. We dig deeper into performance and outline the actions we took in McKinley Carter portfolios, plus provide an outlook for the remainder of 2021.