Part 2: What actions did we take in McKinley Carter portfolios last year?

Easing inflation pressures and a resolution of the fiscal turmoil in the United Kingdom fueled a strong rally in stocks and bonds early in the fourth quarter, but hawkish Fed guidance, disappointing economic data, and rising global bond yields weighed on markets in December and the S&P 500 finished the fourth quarter with only modest gains that capped the worst year for the index since 2008. Roughly 45% of stocks in the Russell 1,000 fell 20% or more on a total return basis in 2022. 30% of the index fell 30%+, just under 20% fell 40%+, and 11% fell 50%+.

In sum, 2022 was the most difficult year for investors from a return and volatility standpoint since the Global Financial Crisis. Multi-decade highs in inflation combined with historically aggressive Fed rate hikes and growing concerns about economic and earnings recessions to pressure both stocks and bonds. Major benchmarks for both stocks and bonds declined together for the first time since the 1960s, punctuating just how disappointing the year was for investors. 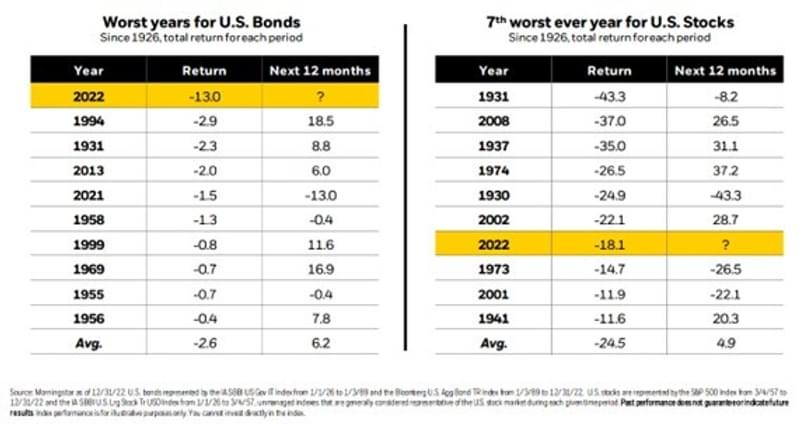 The beginning of the fourth quarter was volatile as global bond yields spiked in response to the spending and tax cut package proposed by former U.K. Prime Minister Liz Truss, and that volatility led to the S&P 500 hitting a new low for the year on October 13th. However, that market turmoil ultimately resulted in political change in the U.K. as PM Truss resigned on October 20th and was replaced by former Chancellor of the Exchequer Rishi Sunak, who immediately took steps to disavow Truss’ plan and restore market confidence in U.K. finances. In part due to a very short-term oversold condition and following a no-worse-than-feared third-quarter earnings season, stocks and bonds staged large rallies in mid and late October and the S&P 500 finished the month with a substantial gain, rising 8.1%.

The positive momentum for stocks and bonds continued in early November thanks to a growing number of price indicators that implied inflation pressures had finally peaked. The October CPI report (released November 10th) showed the first solid decline in consumer price data for the year and that was echoed by price indices contained in national and regional manufacturing reports, as well as other official inflation statistics. Both stocks and bonds enjoyed solid gains in response to the data because while inflation remained far too high on an absolute level, markets hoped these declines would result in the Federal Reserve not raising interest rates as high as previously feared. Those hopes were boosted after the Thanksgiving holiday when Fed Chair Powell stated that interest rates would only need to rise “somewhat” higher than previous projections. Investors took that “somewhat” remark as a sign that previous estimates for rate hikes were too aggressive and that extended the rally into early December. The S&P 500 ended November at multi-month highs with another solid monthly gain of 5.6%.

However, investor optimism faded in December as global central banks signaled that they were still committed to aggressively hiking rates, economic data showed clear signs of slowing growth, and several negative earnings announcements raised concerns of an earnings recession in 2023. First, at the December meeting, the Fed revealed that they expected rate hikes to take the fed funds rate above 5% (from the current 4.375%), which was higher than market expectations. Then, economic data released in mid-December, including regional manufacturing indices and the November retail sales report, showed economic activity was slowing. Finally, both the European Central Bank and the Bank of Japan surprised markets with hawkish policy decisions, providing yet another reminder to investors that rates will continue to rise in 2023 despite clearly slowing global economic growth and the increasing threat of recession. Stocks dropped from mid-December on, and the S&P 500 ended the month of December with a loss of 5.90%.

Unlike the first three quarters of 2022, when all four major indices saw quarterly declines, performance was mixed during the fourth quarter as the Dow Jones Industrial Average rose sharply, while the S&P 500 and Russell 2000 were solidly higher. Like most of 2022, however, the Nasdaq lagged and fell slightly in the fourth quarter. Expectations for higher rates, slowing economic growth and underwhelming earnings weighed on the tech sector in the fourth quarter, which was the case for much of 2022. Conversely, less economically sensitive companies that trade at lower valuations than tech stocks outperformed again as investors continued to shift towards defensive sectors amid growing recession fears.

On a full-year basis, all four major indices posted negative returns, with the Dow Jones Industrial Average relatively outperforming while the Nasdaq badly lagged the other major indices.

What actions did we take in McKinley Carter portfolios last year?

Market history is clear: Declines of the magnitude we saw in 2022 are usually followed by strong recoveries, not further weakness. The S&P 500 hasn’t registered two consecutive negative years since 2002. Market declines such as we witnessed in 2022 have ultimately yielded substantial long-term opportunities in both stocks and bonds.

The stagflation of the 1970s and sky-high interest rates of the early 1980s eventually gave way to the strong economic growth and market rally of the 1980s. The dot-com bubble burst of the early 2000s was followed by substantial market gains into the mid-2000s. The financial crisis, which remains the most dire economic situation we’ve experienced in modern market history, was followed by strong rallies in the years that followed, and not even the worst pandemic in over 100 years could result in sustainably lower asset prices.

The losses in stocks and bonds were driven by decades-high inflation, a historic Fed rate hike campaign and geopolitical unrest. But while those factors were clear negatives for asset prices in 2022, it’s important to note that as we begin 2023, the market is approaching a potentially important transition period that could see each of these headwinds ease in the months ahead.

As we stated in our previous reports, many inflation indicators such as the Consumer Price Index (the CPI has fallen from a high of 9.1% in June to 6.5% in December), commodity prices, and the 5-yr. inflation breakeven rate have likely peaked and are headed lower, giving the Federal Reserve fewer reasons to aggressively raise short-term interest rates from this point. 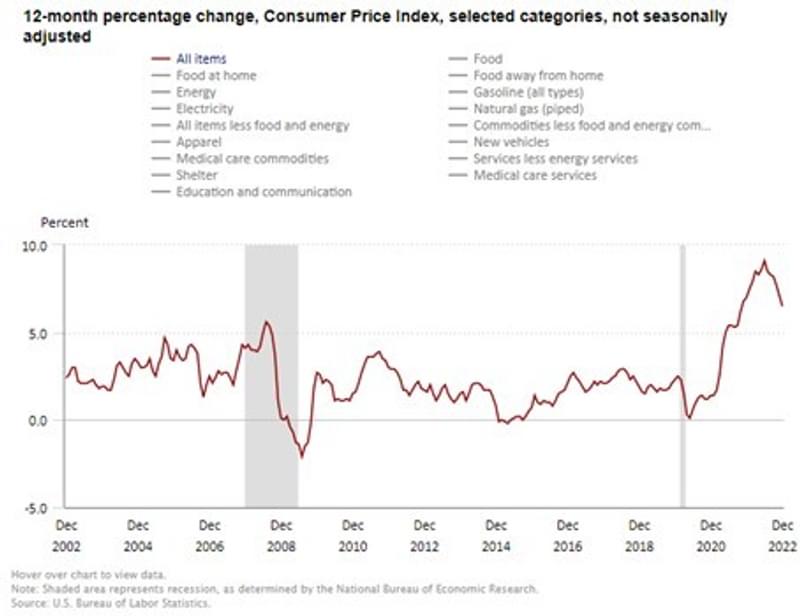 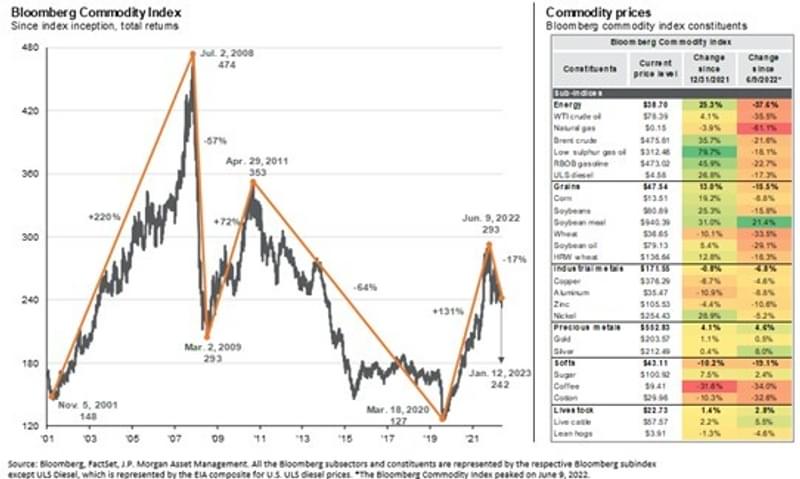 Additionally, all last year, we were of the opinion that the economy was not in recession as unemployment remained historically low and consumers’ balance sheets were in good shape. Furthermore, TSA airline travel data indicated an ongoing willingness of U.S. citizens to spend freely on trips and vacations.

However, there is increasing evidence that the global economy is headed for recession due to the efforts by central bankers across the globe to control inflationary pressures by raising interest rates to stymy economic growth. These efforts are aimed at reducing employment and therefore demand for goods and services. As demand declines, pressure on prices will lessen and inflation will likely decline.

An unfortunate consequence of these actions is the uncertain impact on corporate earnings and therefore the stock market. While earnings estimates have steadily declined this year, the projections for next year remain in positive territory for large cap and international stocks. Should the analysts’ projections for 2023 be lowered due to more evidence of downward economic pressure, the stock market may have further to fall in the first half of this year. If the economy or corporate America proves to be more resilient than forecasts, it could provide a positive spark for asset markets in early 2023.

The primary competition for stocks is the bond market and with short-term Treasuries yielding above 4% and corporate earnings estimates in doubt, many investors are now moving their investment dollars to bonds to reduce portfolio risk. This phenomenon has not been experienced in many years as interest rates are back to 2007 levels. 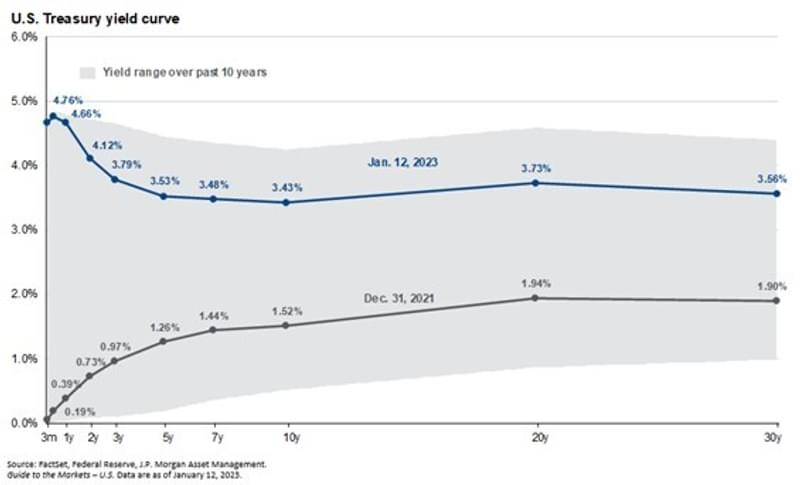 Despite near-term valuation headwinds for stocks, we believe that over the next year we will see stocks outperform bonds as inflation continues to subside, the Federal Reserve stops raising interest rates, and the stock market anticipates an economic recovery in 2024.

International stocks, which have been hurt by the strong U.S. dollar, may see a recovery this year as U.S. interest rates peak and investors take advantage of more attractive valuations found overseas and a weaker dollar.

One caveat to our 2023 forecast is the uncertainty surrounding the Federal Reserve and its goal for core inflation to reach 2%. We believe this goal will likely not be achieved for several years and, if the Fed remains determined to drive inflation down to their target over the next year by raising interest rates higher than current projections, stocks will likely suffer. We will be closely following interest rate trends in 2023 as they will heavily influence the severity of any economic downturn and the impact on employment.

In sum, while markets will continue to be challenged by economic uncertainty, we feel that inflation will ease this year and the economy will avoid a significant recession. Additionally, over the course of 2023, it is not unreasonable to expect that both stocks and bonds will generate positive returns for investors as inflation subsides. 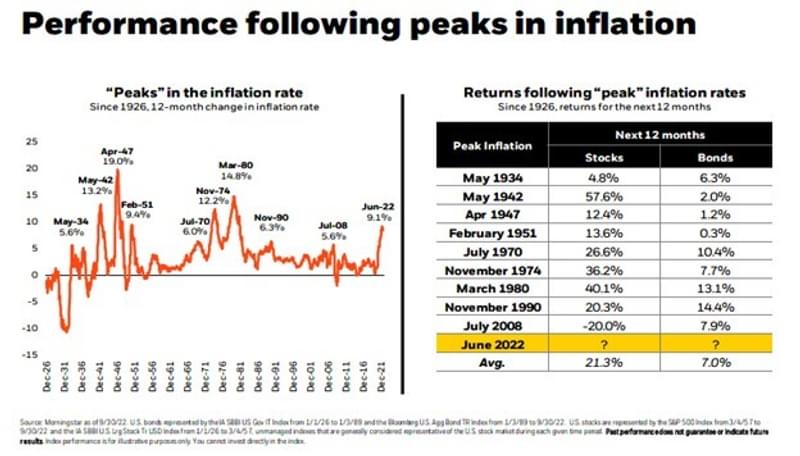 Sailing through rough seas is a frightening experience that feels like it will never end. Fortunately, rough seas eventually give way to calmer waters and a more comfortable sailing experience. Coming off strong stock performance for several years, the stock market has endured its own stormy seas this year with a significant pullback in 2022 as global economic concerns brought about by multi-decade highs in inflation, rising interest rates, and the war in Ukraine, have crushed investor optimism. We’ve experienced an unusual phenomenon this year – the simultaneous decline of stock and bond markets. Throughout the third quarter, investors’ concerns focused on global instability, rising prices and the possibility that central bank efforts to tame inflation would cause economic growth to falter. The result has been tremendous volatility in stock and bond markets. Learn more.

Our Senior Investment Strategist Dave Nolan provides a look back at 2Q2022 and the actions taken by McKinley Quarter. In the latter part of his investment report, Dave offers an outlook for the remainder of 2022.